Posted on January 23, 2014 by Airmeith Naturals

This year, instead of one specific herb species, the Herb of the year is an entire Genus. Artemisia is a large, diverse genus of plants with between 200 and 400 species belonging to the daisy family Asteraceae. Some of the common names for species in this genus include Mugwort (A. vulgaris), Wormwood (A.absinthum), Tarragon (A.dracunculus) and Sweet Annie (A.annua).

Most of the Artemisia are known for their strong aroma and bitter taste. This seems to discourage herbivory, making the dried herb a good deterrent for fleas , moths and other insects. Wormwood was often used in the brewing of beverages such as beer, wine, vermouth and Absinthe. Some species are notably used as a flavoring. A good example being the use of A. dracunculus (Tarragon) in French cuisine. Artemisias have also been traditionally used in herbal medicine to aid the digestive system, serve as a liver tonic and as treatment for malaria. 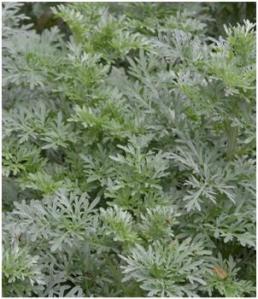 Artemisias tend to be hardy perennials, drought tolerant and able to grow in a variety of conditions. They also come in a wide mix of shapes and sizes, ranging from sprawling ground covers to large shrubs. Many have narrow silvery foliage, with some having broader leaves. There are even some that have dark green foliage. No matter how you look at it, Artemisia make an interesting addition to your garden with their beauty and functionality. 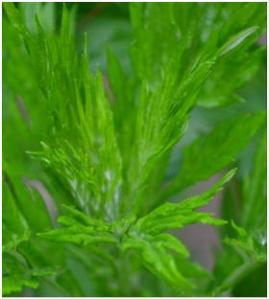 Throughout the year we will be blogging about some of specific species of Artemisia. There will be more information about growing tips and uses. So stay tuned and let us know if there is a specific species you want to learn more about.

Anna has over 25 years of experience working with herbs. She trained as a chef specializing in classical French cuisine. Anna has extensive knowledge of herbs used in cooking, as well as having researched the historic use of culinary herbs & spices. She is a Certified Community Herbalist who has completed multiple apprenticeships and classes with renowned Herbalists along with her own studies. Her concentration is in Western European Herbal Practices. She has attended college for Environmental Science as well as earning her certificate in Massage Therapy and is licensed in the state of Massachusetts. In addition, Anna is a Certified Reiki Master Teacher. Anna lives in Western Massachusetts with her family and has over an acre of gardens to play in. Anna is the herbalist at Airmeith Naturals in Holyoke Massachusetts
View all posts by Airmeith Naturals →
This entry was posted in Artemisia, flowers, Gardening, Herbs, Home & Garden, Natural Health, Uncategorized, western Mass and tagged airmeith naturals, Artemisia, Garden, Herb, herb species, Herbalism, home and garden, medicine, Sweet Annie, Tarragon, the Herb, western mass. Bookmark the permalink.